AI & The Automation of Labor

Talk Abstract: In the past 10 years, we have seen the rise of SAAS (Software As A Service). We have seen SAAS take over many of the existing businesses. Amazon, NetFlix, Expedia are household name SAAS-operated businesses that replaced traditional ones As Machine Learning (ML) and Artificial Intelligence (AI) rise, we are also seeing lots of jobs replaced and automated by machines. This is happening at a much faster pace than anticipated. AI is also replacing jobs that were once thought to be securely dominated by humans. These were jobs that require some form of human intellect We will be discussing what AI really is beyond what the media defines it to be. We will also discuss the implication of this automation on society & the labor market. We will try to show that AI, contrary to the latest media scare, is going to bring an era of unprecedented productivity gains and prosperity. Something comparable to what the industrial revolution brought a few centuries back. But that requires us to be prepared as a society

Ahmad Abdulkader is a well-renowned industry expert, with over 50 publications and patents, in Machine Learning and Artificial Intelligence.

Ahmad is currently a Distinguished Scientist at Facebook AI Applied Research. Ahmad invented DeepText, a Deep-Learning Text Understanding Platform that is widely used throughout FB and the open-source community.

Prior to Facebook, Abdulkader was the co-founder & CTO of Voicea.ai which was acquired by Cisco in 2019. Voicea built a widely-used meetings platform that became part of Cisco's WebEx.

Ahmad also worked for Google where he built the Optical Character Recognition and verification of Google's BookSearch. Ahmad is one of the main contributors to Tesseract: The most widely used open-source OCR Engine.

At Microsoft corporation, Ahmad was one of the pioneers of the Handwriting Recognition Technology that powers the Microsoft Surface devices.

Ahmad also is one of the earliest contributors to Arabic OCR & Handwriting Recognition. Ahmad is the co-inventor of the first Arabic OCR Engine (ICRA) in 1994 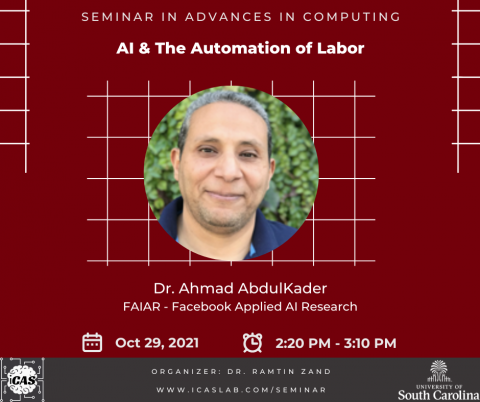