Working with neuroscience data in the Python ecosystem

Talk Abstract:  About 15 years ago, as I was working on a graphical interface for scientific software in Matlab, I got frustrated by the clumsy code structure that Matlab required for GUI coding. Although I thought that the C++ Qt library would be a great alternative, I did not want to get my fast-prototyping process slowed by low-level coding. Since Python had bindings for Qt, I decided to translate all my code into Python. To my surprise, I was able to swiftly complete this process over the weekend. Since then, I have been working almost exclusively in Python, and I never regretted it a single day. In this talk, I will the main components of the Python stack for scientific programming, focusing on neuroscience and illustrating it by summarily analyzing EEG recordings (MNE-Python). I will discuss why Python has become a major player in this field and how limitations typical to interpreted languages (e.g., slow at runtime) have been tackled with libraries such as NumPy. I will also explain why Python is a strong environment for data wrangling by introducing libraries like Pandas – which offers data frame functionalities similar to R – and XArray. Finally, I will touch upon how libraries like Seaborn provide a high-level interface for quickly producing publication-quality figures with only a few (if not a single) lines of code. 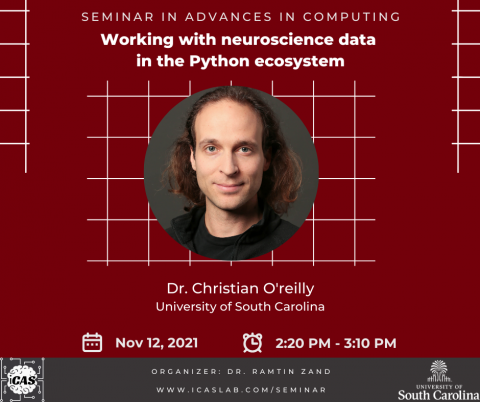